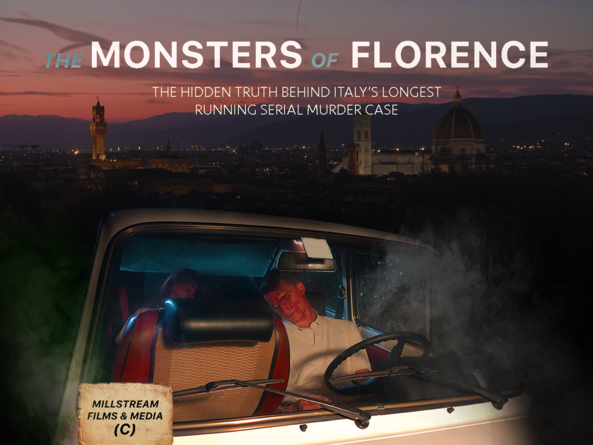 1 x 90 Ready for Broadcast, produced by Millstream Films & Media with the support of the Emilia-Romagna Film Commission and distributed by Espresso Media International. Premiered in Italy on A + E Networks Crime and Investigation Channel (Sky Canale 119) Sunday August 2, 21:05 and aired on La7 in March 2021.

It is a cold case that after 50 years still haunts Italy today – an epic travesty of justice shrouded in mystery and deception. The case known in Italy and internationally as the Monster of Florence involved the ritualistic serial murder of eight young couples in the country lanes around Florence in the 1980s. Four Italians, 2 French nationals and 2 Germans were killed, and in most cases, the sexual organs of the female victims were mutilated, cut out and taken away from the scene of the crimes as fetishes.

For the first time in English, made for the international market, this impeccably researched documentary tells the story of Italy’s most gruesome serial murder case, going in depth into the untold tale of  corrupt law enforcement, secret services, powerful freemasons, bizarre esoteric sects and decades of cover ups and evidence tampering in the highest circles of Florentine society that sent innocent men to jail and allowed guilty men to walk free.
This unforgettable saga features:

This film follows the thread of the detectives and magistrates convinced there was not a lone serial killer but rather a network of assassins for hire, men who sometimes worked alone and sometimes worked together, protected by a powerful higher level of institutional figures  who prevented the truth from coming to light.

With unprecedented access to investigative materials gathered over the last decade, the producers examine the fact and fable surrounding this case, thoroughly exploring the various theories that have made the Monster of Florence one of the world’s most baffling unsolved mysteries. It is the film crime buffs have been waiting decades for: The Monsters of Florence.